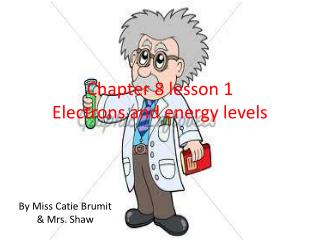 Chapter 7-1 Electrons and their Energy Levels Part 2 - . energy levels. the period on the periodic table represents the

10.4 Energy Levels of Electrons - . electrons move in definite energy levels; these are labeled 1 - 7. sublevels in each

Energy Levels, Electrons, and the Periodic table - . you need to be referring to the periodic table while reading these

Energy lesson 1 - . objectives: to recall and name the forms of energy to be able to identify energy transfers in

Unit 4 Chapter 8 Lesson 1 - . competition for control. big idea. anticipatory set. how does taking your pencil that you

Lesson 1-8 - . graphs and functions. definitions. functions- a relationship between input and output. coordinate

Lesson 8 - 1 - . discrete distribution binomial. knowledge objectives. describe the conditions that need to be

Lesson 8-1 - . angles of polygons. transparency 7-5. 5-minute check on lesson 7-4. use a graphing calculator to find tan

Lesson 8-1 - . angles of polygons. objectives. find the sum of the measures of the interior angles of a polygon sum of

Lesson 8 - 1 - . discrete distribution binomial. knowledge objectives. describe the conditions that need to be present to