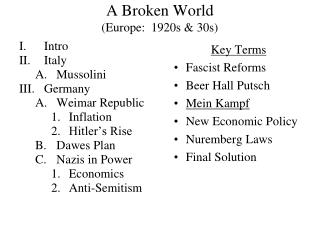 Europe and the World - New encounters, 1500-1800 chapter 14. europe and the world. introduction. many europeans were not

1920s Check Point - . the 1920s were characterized by all of the following except increased migration of blacks to the

1920s and 30s The Great Depression - . review. this was the name given to the period of fear of communism in the u.s.