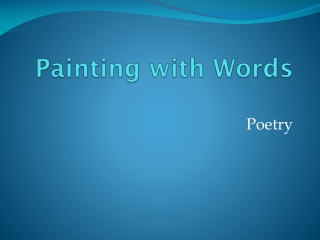 Painting with Words. Poetry. Form- the structure of the writing (what it looks like on the page) Innocent If love were a crime, And you were jailed because you claimed that you loved me, And evidence was sought of your guilt or innocence, You’d get away scott free. Painting with Words - . poetry. form- the structure of the writing (what it looks like on the page) innocent if love were

Painting with Words - . poetry. structure in poetry. form- the structure of the writing (what it looks like on the page)

Painting Pictures with Words: “Dress-up your Writing” - . by c. wardman – adapted from kathleen b. scales ozarks

Painting With Phrases - . grammar review with mrs. demos and mr. stein. objectives. students will recognize a phrase in

Painting with Appositives - . look at the following two images and the sentences which accompany them. you are to

Painting with PARTICIPLES - . participle: a form of a verb that acts as an adjective can be past tense (-ed) or present

Painting with Light - . x. looking back: self portrait found kodak-moment at the capital hill group health cooperative. i

Painting with Participles - . many authors say that writers need to show a story rather than tell a story—or paint a

Painting With Light - A. ssignment gr. 11. painting with light. print from negative by samantha beauchamp. a. ssignment

Working With Words - . in a balanced literacy classroom. by leigh daley. goals of the www block:. learn to read and spell