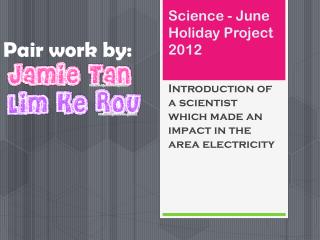 Pair work by:. Science - June H oliday Project 2012. Introduction of a scientist which made an impact in the area electricity. He was the scientist who invented the electric battery. Science Fair Project 2012 - . ask a question? . what do you want to investigate or figure out in the this lesson? what

June 2012 - &quot;working together”. practical insights for effective cooperation . june 2012. “the art of