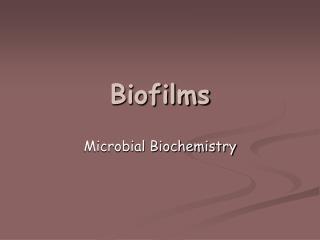 Biofilms. Microbial Biochemistry. Definition of a Biofilm. Biofilms are communities of microorganisms in a matrix that joins them together and to living or inert substrates What are biofilms and how did they potentially contribute to the evolution of cells? - Imagine a nerve cell that measures