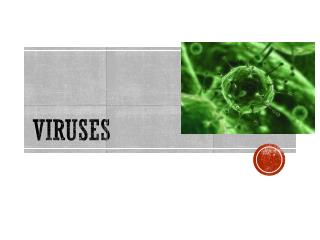 Viruses. What is a virus?. Viruses are not alive A virus in an obligate intracellular parasite Requires host cell to reproduce Can be seen at magnifications provided by the electron microscope (they are microscopic). Characteristics of Viruses.

VIRUSES! - . we have all gotten viruses… from bacteria, plants to animals. viruses cause colds, flu, warts and diseases

Viruses - . mader -chapter 21. the basic structure of viruses includes a protein capsid that surrounds and protects the

The Position of Viruses in the Biological Spectrum - . there is no universal agreement on how and when viruses originated

Viruses - . a virus is program code that causes some undesirable and unexpected event to happen in a computer. viruses

Viruses - . viruses are microscopic (organisms?) which exhibit some characteristics of living things, but not all.

Viruses - . microbiology 221. viruses. obligate intracellular parasites they are able to reproduce their life cycle only

Viruses - . non-living infectious agents. what are they? how do they work? where do they come from? and… what good are