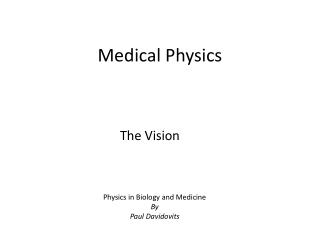 Medical Physics. The Vision. Physics in Biology and Medicine By Paul Davidovits. Optics علم البصريات , which is the study of light, is one of the oldest branches of physics. It includes topics such as microscopes, telescopes, vision ,

MEDICAL CONDITIONS - Lesson 12. medical conditions. introduction. a medical emergency occurs because of illness or a

The Medical Home “Every Child Deserves a Medical Home” - . name of presenter. outline. what is a medical home? why is