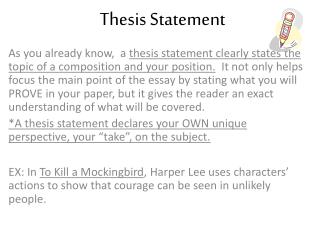 Thesis Statement. As you already know, a thesis statement clearly states the topic of a composition and your position. It not only helps focus the main point of the essay by stating what you will PROVE in your paper, but it gives the reader an exact understanding of what will be covered.