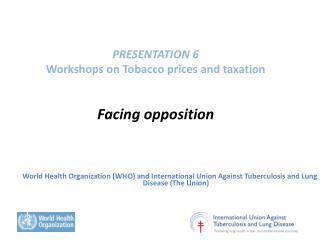 PRESENTATION 6 Workshops on Tobacco prices and taxation Facing opposition. World Health Organization (WHO) and International Union Against Tuberculosis and Lung Disease (The Union). Questions. What are some of the common arguments against increasing price and taxes for tobacco products? The opposition facing the War of 1812 - . by: adele sutton, megan chirco , and miles goeglein.

Opposition - . why? how? formalities. why opposition? 1/2. better essays! the current degree project will undergo

Workshops on LIVING - . benefits value enrichment welfare of employees and their family goodwill for the company

Workshops on LIVING - . duration : 3 hours benefits value enrichment welfare of employees and their family goodwill for