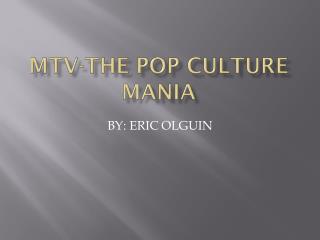 MTV-THE POP CULTURE MANIA. BY: ERIC OLGUIN. INTRODUCTION. What is pop culture? Everything around us that has an influence in anything we do! The pop culture that has influenced our time came about in the 1980’s, right around the time MTV made its television debut. (Which was August 1, 1981). Culture - . what is culture . lets pretend that you live in new york city… you cousin from out of town comes to