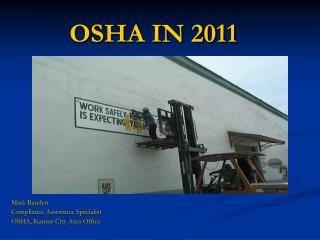 OSHA IN 2011. Mark Banden Compliance Assistance Specialist OSHA, Kansas City Area Office. Safety & Health Under Dr. Michaels: Where Are We?. Put a priority on enforcement as a driver of compliance ! The OSHA agenda is going to come back to ergonomics? OSHA - . occupational safety and health administration. purpose of osha. establish standards for safety in the workplace

OSHA - . if you think this is a small town in wisconsin “we need to talk”. leave a sleeping dog lie. osha.

OSHA - . the exciting annual review!!. what is osha??. osha= occupational safety and health administration it’s not

OSHA - . capatilizing on your staffing firm and your safety partnership. marty schertzer and christy lamberton. what

OSHA Safety and Health Update January 2011 - Still protecting the safety and health of the american worker.. osha at 40!.