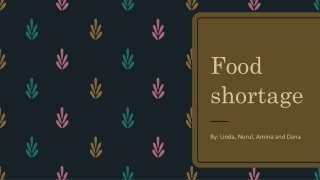 Food shortage. By: Linda, Nurul, Amina and Dana. What is food shortage?. Food shortage is when there is not enough food available for people to eat. If a food shortage persists or continues it turns into a famine. Food Shortage - . by christopher and andrew. what is food

Food Shortage in SOUTH ASIA - . linda lin. what’s going on??. the price of rice in many parts of south asia is rising

Shortage: - Scarcity- people have unlimited wants and needs. simply- people are greedy. there are only so many resources

Problem A: Food Shortage in the Hills - . suppose you are a n eolithic farmer sitting at the dinner table. your stomach

The Ultimate Food Shortage Survival Guide Book Review - In the chaotic environment of the battlefield, stretchers need to

Shortage Annex - . supply holds the official shortage annex for any item in the company hand receipt holders will be

Nursing Shortage - . by: jessica klahm &amp; christine nguyen. what comes to mind when you think about, “nursing

The Nursing Shortage - . karin mogren-kuzma. learning objectives. the student will be able to describe the current and