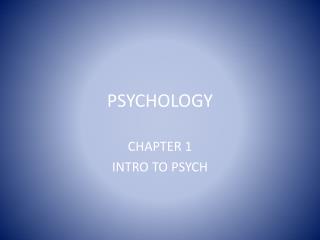 PSYCHOLOGY. CHAPTER 1 INTRO TO PSYCH. Why study Psychology?. Psychology helps us to understand why we do what we do by providing a framework Insight into the “whys” by analyzing settings and motives into our actions Practical information about human behavior. OVERVIEW OF PSYCHOLOGY. Psychology - . unit 1: the field of psychology. what is psychology? how can it be applied to everyday life?. behavior.