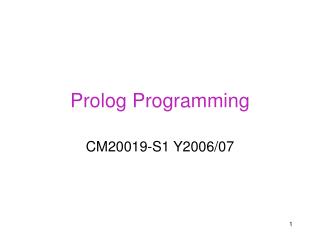 Prolog Programming (Volume 2) - . dr w.f. clocksin. lists. lists are the same as other languages (such as ml) in that a

An Introduction to Prolog - . sept. 2008. prolog statements. like other programming languages, prolog consists of