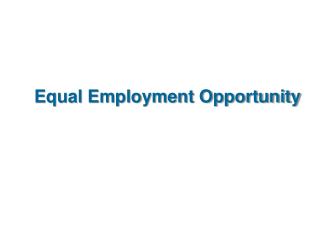 Employment Assistance Services - . logistics. training is from 9:30 am to 4:00 pm restrooms breaks/lunch cell

Discrimination in Employment - . chapter 23. goals. recognize the difference between legal and illegal employment

Raisin in the Sun - . ms. e. lorraine hansberry. background info…. a raisin in the sun is the first play by a black

Working Together…. That’s the Ticket Employment Network Opportunity Conference - . the ticket to work and

Who Wants to Be a Millionaire - - . p.s. procedural quiz. each group will have an opportunity to answer an equal number