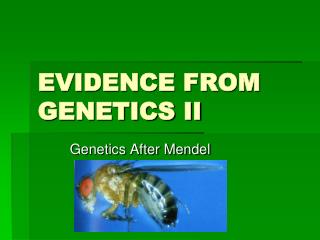 EVIDENCE FROM GENETICS II. Genetics After Mendel. Are all traits this simple?. Some phenotypes are due to the action of a single gene MOST, however, are polygenic Height Skin color Disease predisposition Heart disease High blood pressure Diabetes Cancer. EVIDENCE FROM GENETICS - . can you answer this?. which represents a monohybrid cross between a homozygous recessive and a

Genetics Part II - . chapter 7. autosome inheritance- dominant and recessive (a carrier does not show disease in

Genetics and Heredity II - . complete dominance. the dominant allele completely masks the recessive allele in the

Writing from Evidence - . the ccss reading/writing connection lisa shirley camp, m.ed., nbct. what does parcc tell us?. a