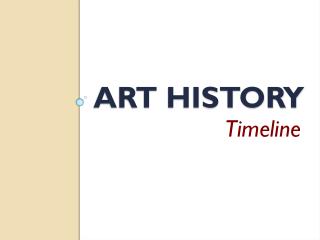 Timeline. Art History. How did it all start?. Art began over 27,000 years ago As humans became smarter their imagination and ability to create art increased Art can be broken up over the span of time into eras and Movements: Pre-historic & Pre-Columbian Egyptian Greek, & Roman Medieval Art History - . chapter 3 arttalk textbook. what is art history?. art history is the record of art from past to present

Art History - . hallema mitchell. methods and inquiries of art. art then- any kind of visual material that is created