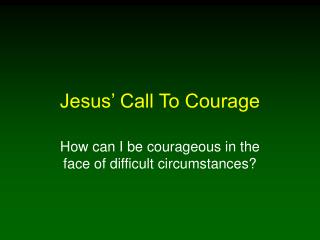 Jesus’ Call To Courage. How can I be courageous in the face of difficult circumstances?. Introduction. Are you ever fearful in troubling circumstances? Guilt of sins Sickness and suffering Fear of unknown Overcome by worldliness Service to God being hindered Jesus Christ is Risen! - . it is appropriate that we pause in our study of prophecy to talk about the resurrection of

KFC Songs - . be bold, be strong chada deep every move i make forever freedom happy song hero inside of me i’ve got the

Circle of Courage - . based on “reclaiming youth at risk”, by larry k. brendtro-martin brokenleg-steve van bockern

Monday, December 9 th - . do now: in your notebooks, answer the following prompt. what is a hero? explain your definition