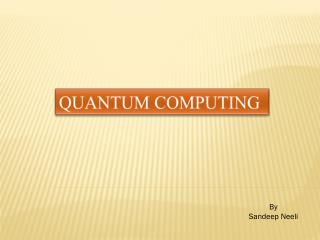 QUANTUM COMPUTING. By Sandeep Neeli. What is a Quantum Computer?. A quantum computer  is a device for computation that makes direct use of  quantum mechanical phenomena, such as superposition  and entanglement, to perform operations on data . Quantum Computing - . by joseph szatkowski and cody borgschulte. what is a quantum computer?. uses phenomenon associated