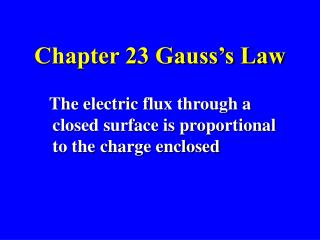 Chapter 23 Gauss’s Law. The electric flux through a closed surface is proportional to the charge enclosed. Carl Friedrich Gauss 1777-1855. Yes it’s the same guy that gave you the Gaussian distribution and … . May the flux be with you - . is that the finger???. gauss’s law 3.2. happenings. wednesday – you should be finished

Electric Flux and Gauss Law - . electric flux, definition. gauss law q in is the net charge inside the surface. applying

Application of Gauss’ Law to calculate Electric field: - . draw a figure with location of all charges and direction of