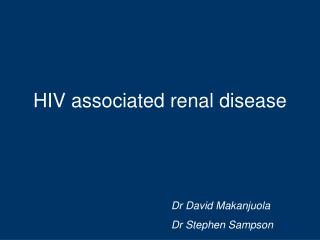 Renal Disease in Adolescents with HIV - Disclosure of financial relationships. this speaker has no significant financial

Renal Disease - . dr. george mellotte. the kidneys two bean-shaped organs, each the size of a fist. weighing ~0.5% of

Renal Cystic Disease - . what you thought you really didn’t need to know – but you do!. objectives. be able to