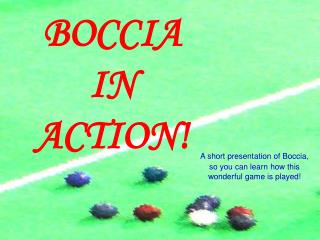 BOCCIA IN ACTION!. A short presentation of Boccia, so you can learn how this wonderful game is played!. Boccia. Boccia is played on a flat and smooth surface , such as a tiled or wood gymnasium floor. The dimensions of the game area are :. 12,5 m in length. 6 m in width. They include :. Technology In Action - Technology in action chapter 3 using the internet: making the most of the web’s resources

Security Awareness 101 ……and Beyond - . “vision without action is only a dream action without vision is merely

How to Conduct an After Action Review - . a.k.a. (the “hot wash”). review conducted after the exercise has concluded

Root Cause Analysis - Boo ! !. root cause analysis. in the environmental testing laboratory. may 2009. marlene moore