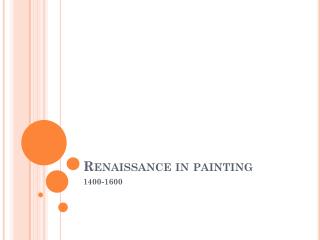 Renaissance in painting. 1400-1600. (pictograms to introduce the topic) The Middle Ages are called so because they fall between twin peaks of artistic glory: The Classical period and the Renaissance Renaissance Painting - . “madonna and child in glory ”. “miraculous mass of st. martin of tours”. “adoration of

Harlem Renaissance Painting Analysis - . choose one of the following paintings and thoroughly complete the painting

Painting in Acrylic - . by: logan khidekel. overview . research paper product mentor what i learned about painting

Renaissance in Literature - . a tour of the various authors …. medieval vs. humanistic themes. theology love god

Renaissance In Italy - . how the contributions of the renaissance figures have influenced our modern-day society . main

Painting in Sydney - We are offering our painting services in sydney. we have over 200 residential properties in sydney.

PAINTING IN DUBAI - Dubaiinteriors.ae is helping you in all the way to make your outside and inside walls pretty and

Diploma in Painting - istudy - With this course, you will be able to refine your painting techniques and also hone your

Painting Services in Singapore - Https://www.nouve.com.sg/paint.html | are you looking for someone who has a very vast