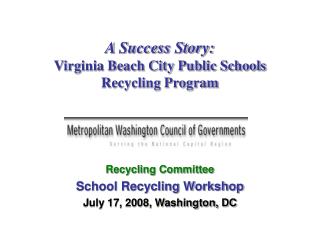 TOWN HALL - . presented by the office of public school construction &amp; the division of the state architect.

Guidance for West Virginia Schools and Districts - . april 2012. introduction to

Schools of English “ ATHENA” - . recycling:. is a number of rules, activities and technical procedures with a view

Division of City Schools City of Mandaluyong - . fy 2014 plan and budget. our location. located at the approximate