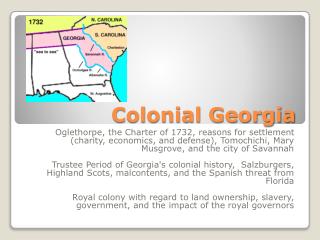 Colonial Georgia - . oglethorpe , the charter of 1732, reasons for settlement (charity, economics, and defense),

Colonial Georgia - . explain the importance of james oglethorpe , the charter of 1732, reasons for settlement (charity,

COLONIAL GEORGIA - . chapter 6 – the founding of georgia chapter 7 – life of people in the colonies. unit 3

Colonial Georgia-The Founding of Georgia - . by dale j. zaboroskie educ 601.1 media and technology for educators an

Colonial Period of Georgia - . where are we now? . in the 1600’s england established permanent settlements in the new

Colonial Music - . what was colonial or “early american” music?. it was not really written in america. there were

COLONIAL DISCOURSE - . competing nationalist visions. colonial knowledge. colonial conquest was not just a result of the

Colonial Africa - . turn to page 522-523 use these maps as references during today’s discussion . scramble for africa.