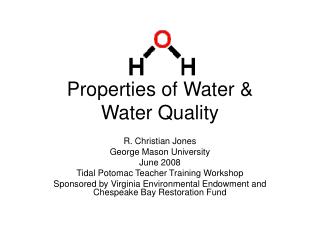 Review of Properties of Water and Water Potential - . fill in your circle with words &amp; pictures. properties of

A Look at Water and Its Contaminants - . water part b. physical properties of water. matter anything that occupies space

Properties of Water - . water. the universal solvent in living things which makes up over 90% of cells and the majority

Properties of Water - . fs unit 5 fcs-fs-5: students will discuss why water and ph are important factors in food

THE PHYSICAL PROPERTIES OF WATER - . major concept. the many unique properties of water are a result of the two elements

Water Quality On completion of this segment you should be able to: - . have some knowledge of the chemical and physical

Water Unit - . why is water important?. water covers about ¾ of the earth living cells are 70% -95% water in nature

Biology I - Water properties &amp; ph. biology i.  about 60-90 percent of an organism is composed of water. water.