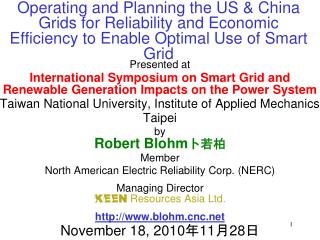 Operating and Planning the US & China Grids for Reliability and Economic Efficiency to Enable Optimal Use of Smart Grid. Presented at International Symposium on Smart Grid and Renewable Generation Impacts on the Power System Taiwan National University, Institute of Applied Mechanics Taipei Presentation on OLPER’S Presented to: Mam.Ammara - . acknowledgements firstly we would thank allah for giving us the

Presented by: Michel - Sights in the world. presented by: michel. manual &amp; automatic. the face of the devil to

PERM ! - There are audits. perm !. &amp; then there is. presented at the 2011 age and disabilities odyssey conference

Presented by: Mr. Dali Mdunge - . 7 july 2014. road map. who is safiri? concept of arrested development how do we remove