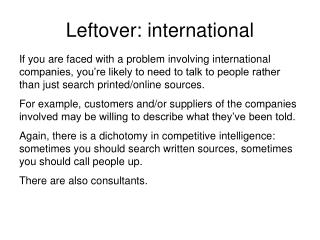 Leftover: international. If you are faced with a problem involving international companies, you’re likely to need to talk to people rather than just search printed/online sources. For example, customers and/or suppliers of the companies involved may be willing to describe what they’ve been told. About 3B International - . 3b international llc is a marketer and distributor of prestige brands. we maintain an

Chapter 12 The Strategy of International Business - . introduction . what actions can managers take to compete more