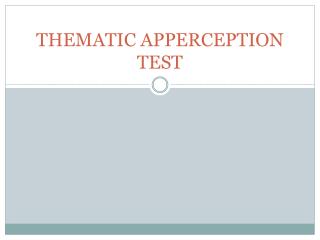 THEMATIC APPERCEPTION TEST. ORIGIN & METHOD. T.A.T is the most widely used constructive projective technique. This test was developed in American university unlike Rorschach, it has its roots in America. It has been developed by Murray & Morgan in 1935, 1943 in Harvard University. THEMATIC MAPS - . mercator projection. why did my plane from paris go so far out of the way to get to chicago?. mollweide

Thematic Statements - . theme. the theme is the underlying idea or message in a story, or a generalization about life.

THEMATIC SLIDES - . introducing the planet. topographic map of the world. introduction: a story of change. a story of