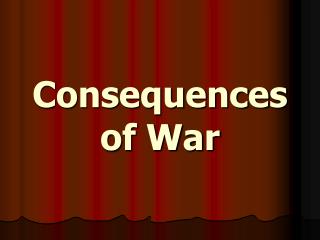 Economics of industry - . the economic consequences of market power, the foundations of industrial policies . intro .

Sales powerpoint - Harassment in the workplace is the precursor to a hostile work environment. understanding the

Economics of industry - . the economic consequences of market power, the foundations of industrial policies. intro. the

Morality and Consequences - . agenda. our question different kinds of answer consequentialism : the contingency of right

UTILITARIANISM - . mill. bentham. singer. introduction. this is a viewpoint independent of religious belief (though

Why are house prices so high and Does it Matter? Causes, Consequences, Measurement Issues, and Future Prospects

GENESIS - . part five book of beginnings god as creator man made in god’s image eden temptationsin the fall and

The Plan for Day Two - . practice and pitfalls (1) natural experiments as interesting sources of instrumental variables