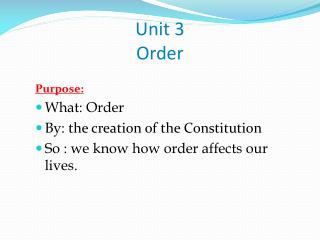 Unit 3 Order. Purpose: What: Order By: the creation of the Constitution So : we know how order affects our lives. Order. What is it? The established system of social organization. A condition in which freedom from disorder is maintained through established authority. Order.