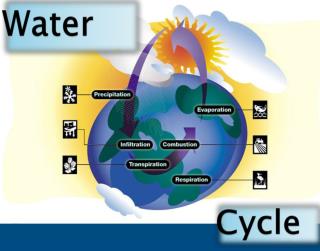 Water. Cycle. Evaporation: Evaporation is when the sun heats up water in rivers or lakes or the ocean and turns it into vapor or steam. The water vapor or steam leaves the river, lake or ocean and goes into the air. Transpiration. Do plants sweat? Water and Watersheds - . maia mcguire, phd marine extension agent. water…it’s all around us. 97% of the water on

A quick summary of the egg lab - . arslan aziz sswims december 2002. what did we do?. test our predictions for what would

How I Use Water - . by marilee mrs. wing’s class. i drink water to stay alive. i use water to grow vegetables. i use

WATER - . content water and water consumption why do we need water? viv who gets water? water additives challenges with

Water, Water, Everywhere - . lakes are large bodies of water that are surrounded by land and are not connected to an

Water in Norway - . what is water?. water is very important for life 70% of earth is covered with water. facts about

3.6 Water Resources - . water, water everywhere and not a drop to drink! . connections between water resources and food

Water and the Fitness of the Environment - . introduction. water makes life possible. all organisms are made mostly of

Unit 6 - Water - . part i: water supply, use and management. where’s the water?. water locations. where is water

Water Environment - . water is essence of life. sr. eliane ilnitski, ssmi. water for the earth. beauty of water. the