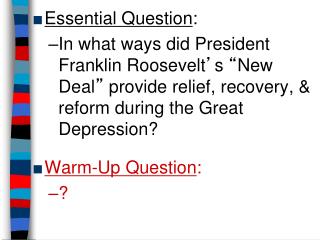 Essential Question : In what ways did President Franklin Roosevelt ’ s “ New Deal ” provide relief, recovery, & reform during the Great Depression? Warm-Up Question : ?. Hoover & the Depression. From 1929 to 1932, President Hoover was criticized for not doing more to end the depression Compositing Using Layers - . photoshop i. unit question. what is compositing and how are layers used to create

Essential Question : - How did different values lead to different american subcultures in the chesapeake , southern ,

Essential Question: - What were the significant individuals &amp; accomplishments of the civil rights movement?

Epithet - . essential question #1 what is an epithet? any word or phrase applied to a person or thing to describe an