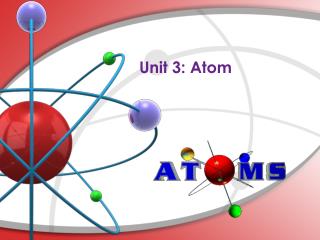 Unit 3: Atom . Atomos: Not to Be Cut. The History of the Atom and the Atomic Theory. Atomic Models. This model of the atom may look familiar to you. This is the Bohr model . In this model, the nucleus is orbited by electrons, which are in different energy levels. The Atom - . an atom … is the smallest particle into which an element can be divided and still be the same substance.

Atom notes - . atom: basic unit of matter, the smallest part of an element that still has the element’s properties.

Refinement parameters - . what are the parameters to be determined? atom positional parameters atom thermal motion

History of the Atom - . http://lifesciencereality.files.wordpress.com/2008/06/atom.jpg. what is an atom? who discovered

The Atom! - . unit 4, chapter 4. click to see more pictures of the atom. and the unit essential question is…. what is

Structure of an Atom - . what is an atom?. atoms are often referred to as the building blocks of matter. each element on

CHEMISTRY - . unit 03 lesson 01 models of the atom. atom  a submicroscopic particle that constitutes the fundamental

The Atom - . the atom consists of two parts:. 1. the nucleus which contains:. protons. neutrons. 2. orbiting electrons.

Atomic Structure - . unit ii—part 3. what is an atom?. atom: the smallest unit of matter that retains the identity of