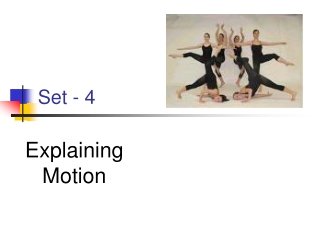 Set - 4. Explaining Motion. What is the difference between speed and velocity?. The two are the same. Velocity relates to instantaneous speed, but not to average speed. Velocity is the speed and the direction the object is traveling. ICS312 Set 4 - . program structure. outline for a small model program note the quiz at the next lecture will be to

4-Piece Sheet Set - View this presentation and know more about 4 piece brown sheets set and its qualities. they are grey

SAT VOCABULARY WORDS: SET 4 - . directions : cadets are to define the following vocabulary words and use each word in a

Set 4 Circles and Newton - . february 3, 2006. where are we. today quick review of the examination we finish one

Interview Practice Question Set 4 - . find the longest palindromic substring in a string? a  palindrome  is a word,