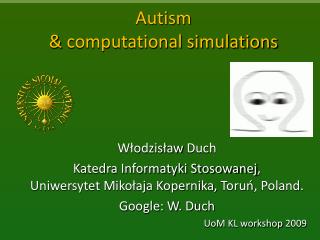 AUTISM CYMRU - . by special arrangement with joe calzaghe. paul shattock university of sunderland. the use of medications

Natural Supports for People with Autism Spectrum Disorder - . griffin- hammis module participants. does anyone work with

Computational Genomics - . izabela makalowska july 15, 2006. the main task in modern biology is to find out how this….

Autism Spectrum Disorder and Visual Impairment (ASDVI) - . disclaimer. the information in this power point is not