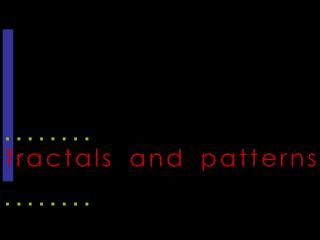 Fractals - . the patterns. fractals. self-similar t hey are the same from near as from far. benoît b mandelbrot the man

Fractals - . by: philip nenni. what is a

Fractals - . what do we mean by dimension ? consider what happens when you divide a line segment in two on a figure.

Fractals - . &quot;clouds are not spheres, mountains are not cones, coastlines are not circles, and bark is not

Chaos and Fractals - . seth drebitko, and michael runyon. iteration. the action or process of repeating such as a

Fractals - . two important properties of a fractal f f has detail at every level. f is exactly, approximately or

Fractals - . a lesson for 3 rd grade rose horan . click on me! cali the alligator !. where do you want to go?. click on

Fractals - . part 1: in which we attempt to describe what a fractal is, because people will ask (but perhaps they will

Fractals - . what do we mean by dimension ? consider what happens when you divide a line segment in two on a figure. how

Chaos and Fractals - . by john como. benoit b. mandelbrot. coined the term fractal from the latin word fractus meaning

Fractals - . and the economy. to begin. for centuries, individuals have searched for some way, whether it be a

Fractals - . what are fractals? who is benoit mandlebrot? how can you recognize a fractal pattern? who is waclaw