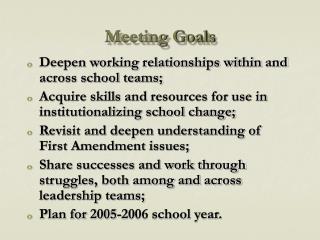 Meeting Goals. Deepen working relationships within and across school teams; Acquire skills and resources for use in institutionalizing school change; Revisit and deepen understanding of First Amendment issues; Share successes and work through struggles, both among and across leadership teams; Goals of Meeting - . review the budget fights how they are related to bargaining discuss upcoming successor contract

Goals of today’s meeting - . present and discuss research results and plans discuss how to better work together discuss

Goals for this Meeting

Goals for Today’s Meeting - Scalable methods for the analysis of network-based data muri project: university of

GOALS FOR THIS MEETING - . assess transition, report on working groups specific, “nuts and bolts” definition of

Goals for Today’s Meeting - Scalable methods for the analysis of network-based data muri project: university of

Goals For This Meeting - . receive input and comment on the recent literature regarding the potential adverse health

Our Goals for this Meeting - Athletic training in wisconsin a 2016 update: state of wisconsin division of medicaid

Goals of Structural Analysis Meeting - . structural analysis of 2 mechanical concepts combined with coils based on the