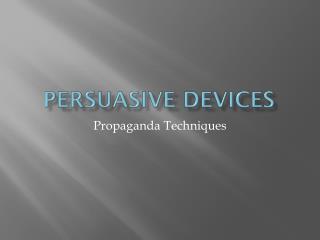 Persuasive Devices - . how to influence your reader. what are they?. they are strategies that we use to try to persuade

Persuasive Appeals and Rhetorical Devices - . devices are use to create specific types of appeals. the three classical

Persuasive - . to convince someone to believe in something or do something. writers may use language that appeals to the

persuasive - . approximately 2300 years ago, aristotle wrote down the secret to being a persuasive speaker or writer, the

Persuasive Writing - . what do i need to know to write an effective essay or speech?. getting started…. the main goal

Persuasive Techniques - . what does it mean to persuade?. how can we persuade?. rhetoric “persuasion is clearly a form