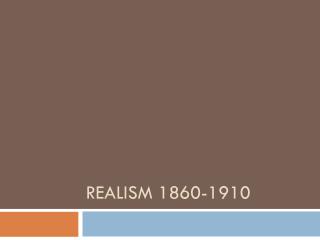 Realism 1860-1910. Where We Came From Previous Literary Movements. Literature of Puritanism – Work Ethic Literature of the Revolutionary Period American Dream The Melting Pot Basic rights of man Emergence of the Other (women, native people, African Americans) Realism 1860-1910 - . where we came from previous literary movements. literature of puritanism – work ethic

Realism vs Anti-realism - . topics. the problem of unobservability the “no miracles” argument the observable /

Realism - . some things are independent of mind. aristotle’s argument for

Realism - . the powers to be in the art world controlled artists’ work by approving art that showed proper technical

Realism - Annibale carracci, “the butcher's shop” 1585s. realism. or how we stopped talking about fields of flowers

Realism - . by phillip martin. realism. what can that possibly mean?. realism. an “ ism ” is a suffix at the end of