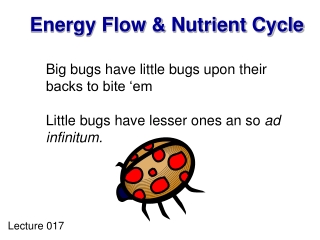 Energy Flow & Nutrient Cycle. Big bugs have little bugs upon their backs to bite ‘em Little bugs have lesser ones an so ad infinitum. Lecture 017. Food Chains Artificial devices to illustrate energy flow from one trophic level to another Ecosystems - . energy and nutrient cycling. outline. i. ecosystems a. definition b. energy flow within ecosystems 1.

THE FLOW OF ENERGY AND THE CYCLING OF MATTER CAN BE TRACED AND INTERPRETED IN ECOSYSTMES - . key concepts. interactions

Nutrient Cycles - . the magic of water what is a nutrient? the carbon cycle the nitrogen cycle the phosphorus cycle the

Energy Flow - . energy. the ability to do work energy has no mass nor volume but is only detected by its effects