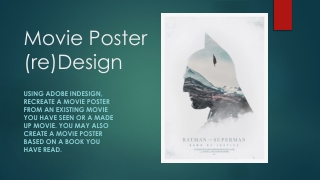 THE MOVIE POSTER - . movie poster history. although considered a relatively new medium to most, the movie industry has

Poster Design - . posters are a method of communication make it easy for people to understand your project if my viewer

Poster Design Tips - This ppt is made by http://www.brochure-design-india.com generating the ideas for poster design