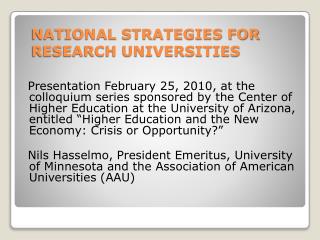 Presentation February 25, 2010, at the colloquium series sponsored by the Center of Higher Education at the University of Arizona, entitled “Higher Education and the New Economy: Crisis or Opportunity?”

Primary National Strategy - . ‘no way!’: an interactive text to support the development of children’s social,

National Strategic Plan for IPM in Schools - . reaching for the stars: making high-level ipm happen in all of our schools

Intervention Strategies for Struggling Readers - . nicole pearson. main thrust. the purpose of this presentation is to