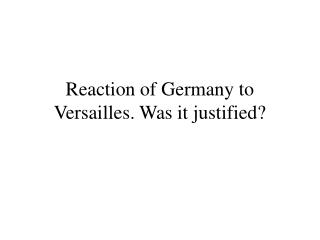 Chemical Reactions: The Catalase Reaction An enzyme-catalyzed reaction between two molecules of hydrogen peroxide. No

AQA organic reaction mechanisms - . click a box below to go to the mechanism. click here for advice. as. free radical

FQ: 1. What were the aims and motives of the victorious powers in drawing up the Treaty of Versailles?  2. Was the - Y a

Germany - . objectives. i can identify the key physical features of germany. (7.3.spi.10) i can examine germany’s

WWII in a Nutshell - . part i – was wwii just an extension of wwi?. what document was written right after wwi? the

Reaction kinetics - . r1. the rate of reaction. consider the following reaction. (r1). a and b are the reactants, c and d