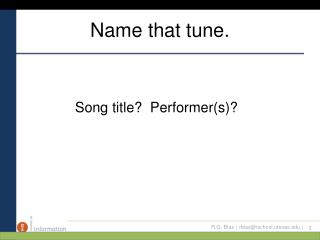 Name that tune. .  Song title?  Performer(s)?. Memory and Cognition. “The Knower” 1/27/10. Objectives. After this class you will be able to (it is my hope!): Have an (increased?) understanding of how psychologists and information scientists develop models of human performance Name that tune! - . jesse russell. instructions. click the underlined name of the song to answer the question if you need

Name that tune… - . capturing the value of the gamer generation for government, academia, military, &amp;

Name that tune - . paraphrased versions of popular songs. by presentermedia.com. paraphrasing. a way of putting