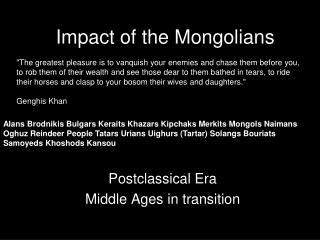 "The greatest pleasure is to vanquish your enemies and chase them before you, to rob them of their wealth and see those dear to them bathed in tears, to ride their horses and clasp to your bosom their wives and daughters." Genghis Khan. Impact of the Mongolians. Impact of the internet on language - . cyberspace and language change. internet. the medium with more significant impact

Human Impact - . how we affect the lithosphere. essential standards. een.2.2 understand how human influences impact the

Juniors Can ! - . jill hammonds core education ltd. what does ict mean for you? what do you understand by the term? what

ImPACT Concussion Testing - . all wwe talent with an active booking contract have been given a baseline impact test. an