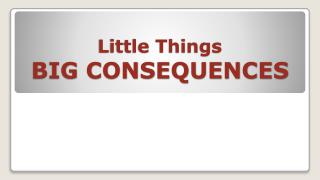 Little Things Are Big - . april 1, 2014. bell ringer. welcome to quarter 4! the following statements are our statements

From Little Things Big Things Grow - . the importance of small trials in growing your business. topics. sell the

Little Things - . importance of little things. life is filled with “little things” some good and some bad most big

University of the Sunshine Coast from little things, big things …… - . about us. 18 years old around 9,600 students

Little Fixin ’, Big Idea - . inference and argument. imply v. infer. to imply is to suggest or hint. to infer is to

Little Computers in a Big World Why should anyone care about “ little ” things? - Where on earth would you want to