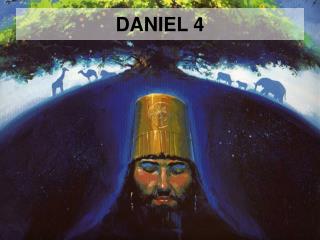 DANIEL 4. DANIEL 4:1-9. The author Frightening dream Bring in the wise men Daniel before the king. THE DREAM A tree Angelic watcher Chop down the tree Leave the stump His mind be changed Authority of the decree Daniel’s reaction. DANIEL 4:10-19. DANIEL 4:20-27. INTERPRETATION DANIEL 4 - . learning from god’s discipline. about nebuchadnezzar. his name, in the akkadian language, means “oh god

DAY 4 Daniel 4 - . king nebuchadnezzar had another dream and he called daniel to interpret it. when daniel heard the

Daniel 4:25 - . …”till you know that the most high rules in the kingdom of men, and gives it to whomever he chooses

Daniel 12:4 - But you, daniel, shut up the words and seal the book, until the time of the end. many shall run to and

Daniel 4:34-37 - 34 at the end of that time, i, nebuchadnezzar, raised my eyes toward heaven, and my sanity was restored.

DANIEL CHAPTER 4: Toppled Images - . what did you go out into the wilderness to see? a reed shaken by the wind? but what

DANIEL - . daniel. therefore when you see the &quot;abomination of desolation,&quot; spoken of by daniel the