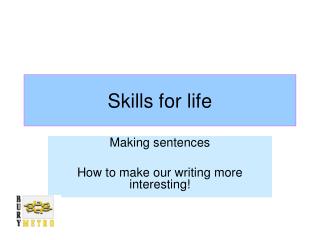 Skills for Life - . food for thought. dear teacher, i am a survivor of a concentration camp. my eyes saw what no man

Skills For Life - . a basketball player. table of contents. general philosophy “acquire balance and growth as a

Study Skills for Life - Study skills for life. why study skills?. this class will help all students: overcome study

life skills - Life skills are one of the important factors in child development, walk now to shinxindia for best life

LIFE SKILLS - . definition. as defined by who(1993), “ the abilities for adaptive and positive behaviour that enable

Life skills - . what are they? how do we develop them? how do we assess them?. knowledge. skills. attitudes.

Life Skills - . the college decision mr. chris williams. what do i want to be when i grow up?. what do my parents and

LIFE SKILLS FOR YOUNG PEOPLE - . tools for youth and social workers. project purpose. to develop skills that will enable

Skills for working life Fractions - . outcomes from this session at the end of this session you should be able to.