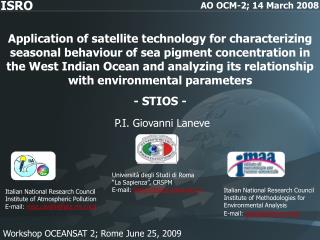 Protein Concentration Determination - . quantitative determination of proteins. there is no completely satisfactory

Behaviour for Learning - . salliann coleman november 2012. behaviour can be an area where we expect so much and teach so

SATELLITE LINK DESIGN - . by s.sadhish prabhu. introduction . cost to build and launch a geo satellite is about 25,000